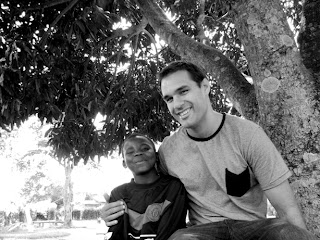 It’s hard to feel close to someone you have only ever seen in a photograph and who lives far away in a country on the other side of the world, I get it! Sometimes when I would get our sponsor child Whilifred’s letter I would quickly open it, chuckle at his childlike comments and questions like “Do you grow any crops” or “ What is your best dish”, put it on my kitchen bench and stumble upon it a few weeks later buried under a pile of bills, notes and crumbs. When it came time to write back to him I would sometimes begrudgingly sit down for 5 minutes and franticly search my brain for something relatively interesting to say that would fill up the 20 lines on the page in front of me. Pathetic, I know.
Then we moved to Uganda. Seeing as though Whilifred lives here too we decide to contact the Tear Fund New Zealand office and see if it might be possible to make the 7 hour journey to his village. After hearing back from them we set a date and last Monday October 18th we met the little boy in the photograph.

We arrived at the Project Office in the rural Kashongi Village and met with the warm, helpful and competent staff who explained to us in detail what they are doing in the village. When I first laid eyes on him I burst into tears. Here, standing in front of me, was this beautiful, precious little 12 year old boy who was not just a picture. He had a beating heart, dreams and desires, he has things he wants to do and be, he feels sad and happy, he was so...human. It suddenly struck me, he was real long before I came here, I just didn’t care enough to think about that. He is not just a picture, he’s real.

Being the touchy feely person I am I was all over him like a rash  Hugging him, kissing him, holding his hand, inspecting him from head to toe, pinching him to check he was real. Although he didn’t speak much English, our translator enabled us to talk freely with him about everything from his favourite subjects in school to what sports he enjoys, to how he was born with just one eye.

When we went to his school to visit his classroom and see his desk, he was a celebrity, through and through. All eyes were on him. Photo proof attached. He was bouncing around with joy, so happy to have white people in his school, holding his hand, loving him, and him only.

The most heart warming moment for me was when we visited his home. Whilifred showed me his family’s photo album. It contained pictures of his brothers, sisters, mother, father and their life’s most precious memories. There were not many pictures (cameras are hard to come by) but you can imagine how I felt when I saw my picture in there. There was Tim and I, sitting on a fence at our friends house and yet also sitting in his family’s treasured album. How many times had I wondered if he even got my letters, let alone photos and gifts. Not only had my letters and photos made it, but they took pride of place. Humbled is an understatement.

We brought some gifts for Whilifred, a Mancheseter and Aresenal Soccer Jersey, soccer ball, coloring in markers, a Superman shirt and a Soccer book for him to write and draw in. Can you tell he loves soccer?  We gave his family some rice, soap and candy. You can picture the look on our faces when his mother then turned around and gave us a gift that had taken her two weeks to make. It was a beautiful handmade bowl and will take pride of place in our home once Customs inspects and de-fumigates it.

The thing that made me the most sad during our visit was not the fact that he was living in a relatively poor area, or that he was born with just one eye. Rather it was the fact that, as our Compassion Leader told us, only one or two sponsors visit each year. Sure, we send our money in and barely even notice its gone, but asking to connect with this child on the other side of the world - that’s a bit too much to ask. It never occurred to me that when our child writes to us 4 times a year and we seldom reply – he wonders why.

If you sponsor a child, my prayer is that you would engage. Engage with them, think about them, make their photo big in your house – give it pride of place, write to them with joy when you get their letter. They are WAITING for your reply! A letter from you, even a sticker from you, is a treasured item – worth far more than you realise. Each thing you send is beloved by them. It takes pride of place in their mud hut house, it adorns the walls, it captivates them. You are SO much more important to them than you realise. You are the reason they are in school. Your support is invaluable and is giving them a chance to make something of their lives. Perhaps even take it one step further and consider making your next holiday destination his or her hometown!

One reason people are sometimes hesitant to sponsor a child is because of the reasonable fear they have that corruption and unaccountability occurs in 3rd world countries. Well, after visiting the actual project, standing on the soil, meeting the children that are only at school because they are sponsored and looking through the well ordered and organised office files of our sponsor child...I can recommend and proudly stand behind the excellent, professional and honest work Compassion and Tear Fund are partnering together to do in Uganda. These are two organisations we trust. 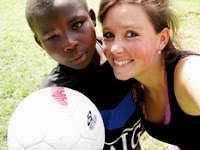 Meeting the boy or girl you sponsor is a moment that you’ll treasure forever as you realise the actual impact your contribution has made in this child’s life. It was for me.