Recently, I challenged myself to try and think of the three humanitarian photography assignments I've done that have impacted me the most. The ones I could never forget. The ones I want you to know about too.  Here’s one of them.

In March this year I was invited by Medical Teams International to photograph their work with the Red Cross in the hospitals within the refugee camps of Tanzania on the borders of Congo and Burundi. 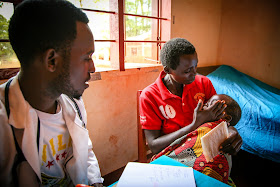 On one of the days I spotted through my lens a little boy and his mother in line waiting to see the Doctor. They stood out to me because of the beautiful way the Mum was holding his lifeless little body. She had such a tenderness to her. Through an interview we found out that her three year old son was very ill, unable to walk and struggling to breathe. After seeing the doctor and being admitted to the wards, we later found out he had severe malaria and pneumonia and his treatment began. 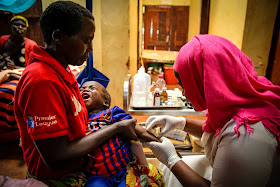 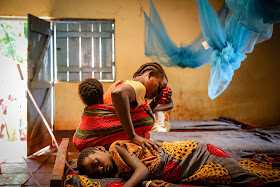 We moved through to the Women’s Ward and I saw 9-year-old Kentia. She was lying on a hospital bed while her mother wept over her frail body. She shook rapidly, her eyelids barely opened and when they did her eyes would roll back into her head. My colleague Angela later wrote, “I found myself desperately praying that the medicine entering her veins through the IV drip would work faster — no child should suffer this way, and no mother should have to watch it.” We learned from the nurse that she had been struck by a severe case of malaria.


Later that same afternoon as we were leaving I noticed another very sick little girl about 8 years old on an oxygen tank. As we left the camp that night, I was scared not knowing if these children would make it through the night. In the morning, I could hardly wait to get back to the hospital to check on them all.

As I walked into the paediatric ward the first thing I noticed was that the 3 year old boy from yesterday was now sitting up! Later that day I even saw him outside drinking water from a soda bottle all by himself. The 9-year-old girl whose mother had been weeping over her was now sitting up too, her recovery was slower, but progress was being made. I breathed a huge sigh of relief. 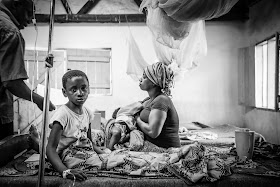 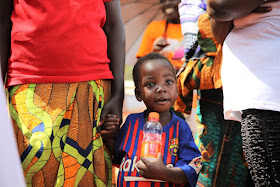 And then I looked to my left and there lay the other sweet little girl from yesterday. She now had her eyes closed and her mother and her Aunty were trying to feed her whatever they could. She was attached to oxygen and it wasn’t looking good. All of a sudden, she started making a noise I’ll never forget and the next thing I knew the Dr placed his hand gently on my back and whispered it was time to go.  I held myself together until I walked out into the sunlight and then I completely lost it. Sobs came up from the deepest place they possibly could. I’ll never forget that moment.

Once I had composed myself, we decided to go check in on some of the mothers that we had spoken to in labour the day prior. I walked in the door, was given a pair of gumboots and told to head into the labour room.  And within minutes I watched twins come into the world.

The twins were a surprise. The mother had no idea. I took two short iPhone videos while I was there. One shows the twins a few hours after they were born and one shows the traditional way a Mother leaves the hospital with her newborn baby.

It’s hard to wrestle with both the tragedy of death and the celebration of new life within 10 minutes of each other, but I guess that’s the business end of hospitals. Just when this world seems ruined beyond repair, a baby is born.

Before this hospital and the many others now in the camps were there, lives that could have been saved were lost for stupid reasons like medication for malaria wasn’t available. Now, that is not the case. If someone gets a treatable illness like malaria or pneumonia, they have a good chance of survival and the drugs to help them. The good news is that incidences of malaria have dropped by 30% globally. In addition, the number of under-fives dying from pneumonia has decreased by 47 percent. This is thanks in part to the incredible work of organisations like Medical Teams International and the generous support of people like you! 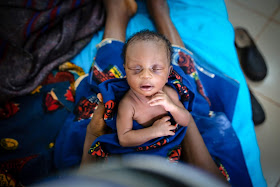